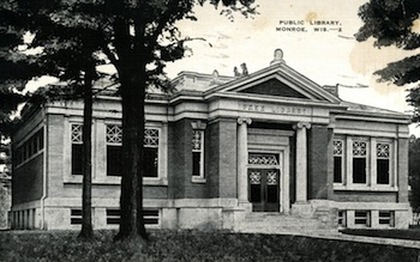 History of the Public Library in Monroe, WI

Early Days
Several groups worked to establish free libraries and reading rooms in Monroe by the end of the 19th century. The Young Men's Literary Association established a sort-of library for the area by placing any books they could find in a building on the square. Lida Conde Ludlow set up the first public library in the basement of the Universalist Church. The Women's Club was active in educational programming, and the School Board established a room in the high school for lectures and programs, which grew to include a collection of books for public use.

In 1903, the Monroe City Council established a Library Board, which wrote to the Andrew Carnegie Foundation, hoping to receive some of the funds that Carnegie gifted to cities around the country to establish public libraries. Though Carnegie offered a grant, the City Council and local residents became divided over the location of the library.

1900s: The Library Is Yours!
Lida Ludlow, continuing her advocacy for a public library, convinced her husband and his two brothers to match the Carnegie offer and establish a library named after her father-in-law. In 1904, Edwin Ludlow, in the name of the Ludlow family, gave $12,500 to the School District to build a new library at 1505 9th Street. The Arabut Ludlow Memorial Library opened in May 1905 and served the community for over 90 years, with 10 library directors serving during that time.

You can read about the complicated road to the Arabut Ludlow building in ﻿What Lida Wants Lida Gets: How Monroe Got its Public Library﻿, by John Evangelist Walsh.

The building still stands at the corner of 9th Street and 15th Avenue, and now houses the Monroe Chamber of Commerce.

1990s: A New Library
In 1990, the Friends of the Library was created to foster community support for a new library building. In September 1993, Lee and June Geiger purchased the old Monroe Clinic building and graciously donated it to the School District of Monroe for a new public library. Thanks to a community fundraising effort of $330,000 and the passage of a $1.65 million referendum, the new Monroe Public Library opened its doors on April 8, 1996. With increased space and accessibility features, and a central location on the historic square, the Library was ready to welcome the entire community.

The Monroe Public Library Today
Today, the Library occupies the first two floors of the former clinic building, with the administrative offices of the Monroe School District occupying the third floor. The Library is the only public library in the state of Wisconsin with a public school system serving as its municipality.

Renovations in 2014 created a brighter, more comfortable space with areas for users of all ages. The Library continues to provide books and audiovisual materials for educational and entertainment purposes to Monroe residents, with current and popular titles as well as an extensive local history collection. The Monroe Public Library also provides computer access, technology instruction, meeting spaces, and enriching programs for children, teens, and adults.